Dating after divorce or death can be complicated, especially if children are involved. As people navigate the world of dating and blending families, they’ve asked Ron Deal, stepfamily expert and author of Dating and the Single Parent, the following questions plenty of times: How soon is too soon to start dating? Should I introduce this person to my children?

Deal believes the key to dating as a single parent is to include the children in the bigger picture.

“Certainly, it depends on the age of the children,” Deal shares. “A younger child is more open to new adults in their life, but you don’t want to introduce your 4-year-old to a person that you just started dating. You don’t even know whether you like this person. Wait until you think this relationship really has a chance of going somewhere, then you bring them into the picture with intentionality.”

For older children, elementary and beyond, Deal suggests talking with them about it first. Ask, “What if I started dating? How would you feel about that?” This way, you are putting it on their radar that this might happen.

“Once you know that the relationship has potential, it is important to create opportunities for everybody to be together and for additional conversations to take place,” Deal says.

Deal strongly encourages couples to discuss a few things before deciding to move forward with marriage, though.

Some couples decide to test the waters with the two families by living together first. This creates ambiguity for the children. When children experience this uncertainty, it creates chaos and empowers resistance. If they don’t like the idea of the families coming together, the ambiguity leads them to believe they could make the whole thing unravel.

Deal believes, more than anything, a stepfamily needs two adults who have clarity about their relationship and the family’s future. By having conversations ahead of time, you are valuing the “we,” and then the children. If you can’t come to an agreement on your parenting styles, that’s serious. Deal believes it’s just as serious as marrying someone with addiction issues. The outcome of these discussions should be part of the equation as to whether or not you plan to marry.

“At least half to two-thirds of dating couples don’t have serious conversations about how they are going to parent when they bring their two families together,” Deal says. “If your parenting styles are vastly different, this can be a dealbreaker.”

In many instances, one parent has been making all the decisions for the children. Now add a second adult into the mix who isn’t their biological parent. What will you do when your child asks to do something and your answer would typically be yes, but your new spouse doesn’t agree with that?

There’s no question that negotiating parenting and romance all at the same time is complicated. You have to manage the complex moving parts for sure. But Deal believes that if you’re going to make a mistake as a blended family couple, err on the side of protecting your marriage.

“The goal here is to protect your marriage, which is why it is so important to talk about these things prior to getting married,” Deal asserts. “Biological parents have an ultimate responsibility to and for their children, but if you make a parenting decision without consulting your spouse, it isn’t helpful to your marriage. The goal is to co-create your parenting response. You cannot have two different answers for two different sets of kids. That unravels your “us-ness” as a couple.

“It typically takes four to seven years for a stepfamily to find their rhythm,” Deal adds. “There is no rushing it. You can’t will it into being. There are certain aspects of your family that will merge faster than others. Even in the midst of figuring out how to make it work, your marriage can be thriving.”

Looking for more? Check out this article of JulieB TV on this topic!

You've got what it takes!

5 Ways Positive Parenting Creates a Lifelong Connection with Your Child

The steps you take now will impact your connection in the future. 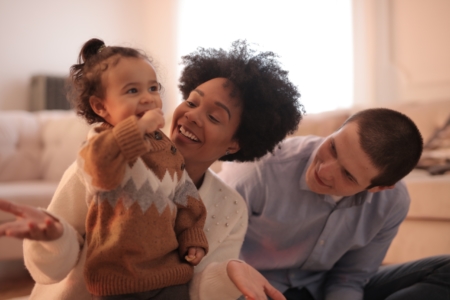 How to Not Blow Up on Your Kids When You’re Stressed: The Timeout

What Husbands Need From Their Wives